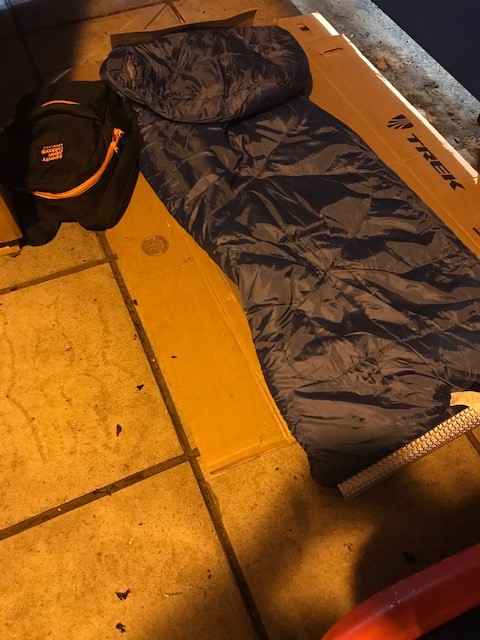 A few years ago I did something that it’s fair to say doesn’t come naturally to me.

Anyone who knows me, would tell you that speaking to strangers is not exactly the first skill that gets ticked when updating my cv. So to start a conversation with a chap I had simply been trying to avoid running over was a bit out of my comfort zone. But for some reason, and out of nowhere, I found myself sat down in Costa chatting to a guy called Pete whose bed for the night was space 7 in my firm’s car park. Pete it seemed, was happy to talk about stuff the average Brit would think twice about telling even their closest friends.

Let me make this clear. In one major sense this blog is not about me. Like in the ‘pat on the back’ sense, where 20 minutes of my time, with a coffee and chocolate tiffin thrown in cancelled out the countless times I had walked past thinking, ‘you wouldn’t even know what to say Tim, don’t get involved’. But it is about me in another sense, as 4 years later I am sure that that chat over coffee and cake had much more of an impact on me than it did Pete. You see it got me thinking about Pete; a chap who not only had a sleeping bag for a home, but had also got badly beaten up the week before and could no longer see his kids. His back story was for a while very similar to mine and then through a bit of bad luck here, a poor decision there, it took a wrong turn. A turn that took him to spending his nights in space number 7.

So that year I agreed to sleep out rough to highlight the work that Worthing Churches Homeless Project do in the area. It was cold. Bitterly cold. In fact it actually started snowing at one point. At 4am, and to much hilarity to those around me, I found a pair of my brother’s boxer shorts in my sleeping bag from the last time it had been used. #boxergate. Still, we got mentioned on the BBC cricket text commentary and that thought alone got me through a few more hours.

But still. It took me another 4 years to say I’d do it again.

This year was more like it. If you can remember a time before the Beast from the East struck and when it wasn’t so cold that your shopping froze by the time you had got it to your car, there was a milder weekend in January that made it altogether a lot easier. No snow this time, no boxer shorts found in the early hours. But there was a new mountain to conquer. Craig. Ah Craig, Dear Old Craig. 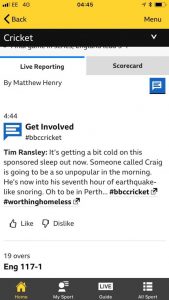 You see what happens is that after a little briefing, (along the lines of ‘this isn’t an endurance test, if you are really cold come on inside’), and a pep talk from the Mayor, you get yourself comfortable on your bit of cardboard and think about turning in. I had come prepared with hours of discussion on my phone on the Liverpool goalkeeping situation to enjoy (courtesy of the boys from The Anfield Wrap), but nothing prepared me for what Craig had in his locker. To say that his snoring went on a bit and was a cacophony of noise set to volume setting mega, doesn’t do it justice. The ever increasing cries of ‘Craig’, CRAAAIIIG’ from his mates did nothing to alter his course and after nearly 7 hours of solid nasal percussion, it was only appropriate that it was Craig that got the credit on the BBC cricket commentary this time.

I think I dropped off twice, maybe for about 20 minutes each time. It is not just the cold, or indeed the snoring, but concrete is so uncomfortable. It digs into every bony part of your body such that you can’t really stay still long enough to actually drop off. And then lack of sleep is really bad for the mind. The thought of doing that over a period of time is difficult to imagine. But let me not discourage anyone reading this from experiencing it. It is heart-warming, it is soul affirming, it puts you in touch with some very cool people who show daily that they care about forgotten people like Pete and Mark and Johnny who I met later in Brighton. Finally it gets you thinking that a little might actually end up being a lot. It gets you thinking that everyone has a back story, everyone was created with worth and everyone was born wi th a purpose. Maybe every now and again we all could do with crouching down and living for a night to support those who are in need of a hand to pull them back up.